Rome? No, better the south. 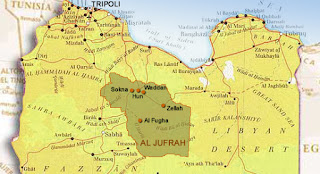 According to Tracking Terrorism   (Created by The Beacham Group, LLC, Terrorism Research & Analysis Consortium (TRAC) a comprehensive resource for the study of political violence of all kinds. In cooperation with a team of 2800 experts, TRAC gathers the best information for exploration of this topic by faculty, scholars, students, government and defense professionals, as well as the general public), though ISIS affiliated twitter accounts posted messages of Rome now being in an hour's reach, ISIS seems to be expanding its reach in Libya in a southern direction towards the Jufrah region. The region is currently left vulnerable due to the withdrawal of Misrata 3rd Battalion from areas in the region, with ISIS exploiting such vulnerability.  ISIS southern expansion is likely an attempt to secure and control supply routes from and to Algeria, Chad and Niger, which will also be a step closer to Boko haram in the the Islamic State of West Africa (Nigeria).
This is exactly the way the Islamic State has build up its power, first on the Ambar province in Iraq and then in north of Syria, based on the strategy inspired by Haji Bakr, former colonel and chief of the Saddam Hussein Air Force Secret Service: infiltrate the local community and acquiring to the cause local important people. So, starting from Sirte, with the help of some key figures the next step for the IS will of course not be any action -so far- towards western countries, but, in order to reinforce its power, take control of the very important routes that link the Sahel with the Magreb. Being successful in this tactics will mean gain not only direct link with Boko haram from Nigeria as suggested, but, more important in my point of view, obtain the possibility to exploit any illegal activities carried out in many important hot spot of the area. First control, then money, and in the end: power. In this reside the real danger of the Islamic State brand at this point of the story.