THE GLOBAL INIATIVE: "Smuggled Futures: The dangerous path of the migrant from Africa to Europe. 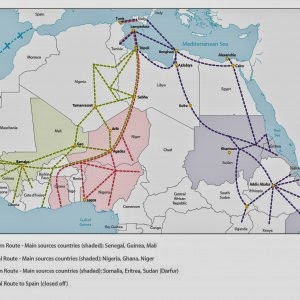 As a network member I am very proud to host on GEOCRIME site and blog the latest report issued by The Global Initiative about the migration criminal industry from Africa to Europe. Following you can read the executive summary but you allowed to download the entire report just click on the the link on the bottom of this page.

EXECUTIVE SUMMARY
In October 2013, Italy captured international headlines when a boat, carrying hundreds of asylum seekers sunk off its coast, killing over 360 people. The incident reflects the tremendous increase in African migration to Europe in recent years, in part due to the Arab Spring. While Africans have been migrating to Europe for decades, the instability across North Africa and the Sahel, coupled with the erosion of Libya’s capacity to control its own borders, has resulted in an unprecedented surge of migrants to Italy in recent years. This surge shows no signs of subsiding.
The decision to migrate may be fuelled by a multitude of motivations. Africa has the fastest population growth rate in the world, and although the continent is making momentous economic gains, it has broadly failed to translate these gains into sustainable livelihoods for its youth. Social and economic disparities, conflict, and crime in several countries throughout the continent, many Africans seek out new opportunities across the Mediterranean.
It is estimated that in 80 percent of these cases, the journey is “facilitated” by migrant smugglers and criminal groups that who provides a range of services such as transportation, fraudulent identification, corruption of border officials and settlement services. Smugglers in transit countries coordinate with smugglers in source countries to act as guides, escorting individuals across the Sahara Desert, heading towards the coast. Although some smuggling networks are organized criminal structures, many are loosely linked chains of individuals, which make it challenging for authorities to dismantle.
Three main smuggling routes characterize the irregular migration to Italy and beyond. The first is the Western route, for which the main source countries are Mali, the Gambia and Senegal. The Western route often connects in the Sahel with the Central Route, for which the source countries are Nigeria, Ghana and Niger. Finally, there is the Eastern route, which sources from Somalia, Eritrea and Darfur in South Sudan, and which tends to cut north through Sudan and Egypt and then along the northern coast of Africa. All of these routes converge in the Maghreb, and in recent years mostly in Libya, for the sea crossing to Italy.
The cost of a trip to Italy averages several thousands of dollars, depending on the distance and difficulty of the route, the level of institutional control over the route and on the transit and destination countries’ response to the migrants’ arrival. It may take years to complete, as many remain in transit hubs along their route to work to afford the next leg of their trip. As a result, many migrants are “stuck” in towns along the way to the coast. In addition to exorbitant prices, migrants endure perilous conditions. As they make their way to the Mediterranean coast, migrants are often travel in overcrowded trucks, facing starvation and thirst before even reaching the coast. Once they reach the Mediterranean, people are packed into boats set for Europe, often embarking without enough fuel to make it to Italy. All too often, migrants drown. If migrants do arrive in Italy, their reception is less than favourable. Many are sent back to Africa.
Given the exponential rise of irregular migrants and the humanitarian crises that accompany their failed attempts to reach European shores, EU states, including Italy, are under a growing pressure to restructure and align their immigration and asylum policies and practices. Current efforts to limit migration have only succeeded in shifting migration routes, forcing many seeking refuge to take more dangerous, riskier routes to Europe.


Finding solutions to the problem of unmanaged migration cannot be limited to Italian border control but require regional cooperation in both Europe and Africa with governments addressing the root causes of mass migration. 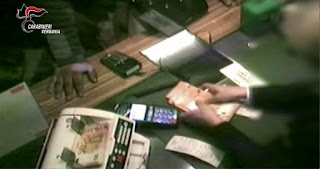