ILLICIT TRADE IN THE MEDITTERANEAN AREA. Intervention in the Master's degree of geopolitics LIMES - SIOI - OLTREILLIMES Roma, 11th of April 2014 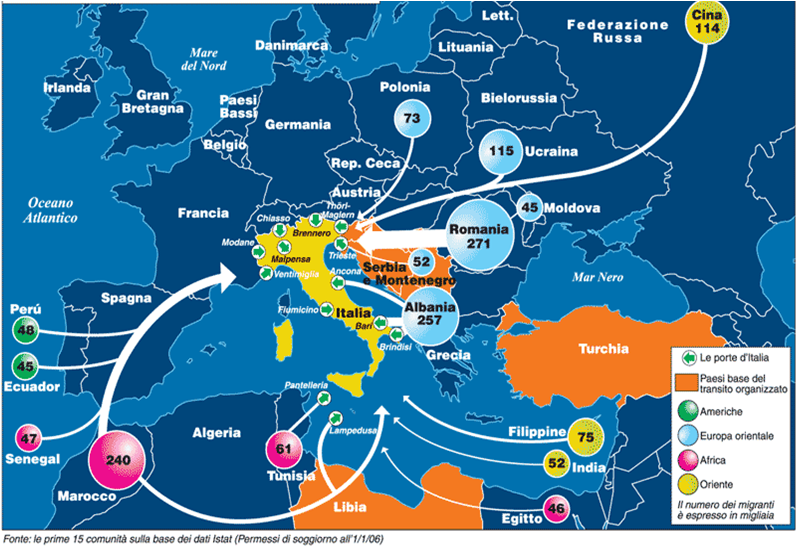 With great pleasure I took the opportunity to intervene within the area of activity of the V Master's degree of geopolitics ' Caos e Poteri: equazioni dei mutamenti' (Chaos and Powers: equations of mutations), organized by LIMES, by the Italian Society for the international organization SIOI and by the cultural association OLTERILLIMES, illustrating the subject matter of illicit traffic in the Mediterranean area and its relative consequences upon societies involved.
The topic, from a criminological point of view, to me obviously more congenial, is extremely stimulating because it allows considerations to be developed both on the criminal aspect related to each single flow of illicit trade: exploitation of migrations, narcotic trafficking, counterfeit goods, tobacco and so on, as well as  in a more criminological view related to the comprehension of the models instrumental to the realization of these activities.
The opportunity is condensed in the explanation of some of the illicit traffics  cited above, the more indicative ones but it has given me the opportunity to develop the most important themes, the ones regarding the contemporary dynamics and the consequent effects of the diverse forms of local criminality, international, transnational and of Mafia-like type.
The importance of the entire Mediterranean basin is historically due to its function as a link to maritime trade flows that are included herein and depart to and from the continent of Europe, Africa and Asia in the western and its offshoot Near and Middle Eastern; not forgetting about the importance of the flows of counterfeit goods and migrants generated by the American continent, mainly in its central areas.
These illegal trades often use normal commercial routes taking advantage from the use of the architrave of every form of smuggling, namely corruption. In the contemporary and post-global era every kind of trade, legal as well as illegal, of a certain standard, take place at international and transnational level, involving the sovereignty of different countries expressed by their borders.  It is obvious that counterfeit goods and migrants have to cross these boundaries; to get this result the criminal international organizations structure and so they can, more specifically they must, exploit an horizontal network of minor organizations, more or less directly hinging on the major one, to facilitate the illegal traffic. Having said that, let us reflect on how articulate must necessarily be a criminal structure that transfers tons of cocaine from the manufacturing countries, mainly the ones that are part of the Triangulo del Norte in central America- Colombia, Bolivia and Peru- or a Chinese organization that transfers thousands of migrants in every continent. 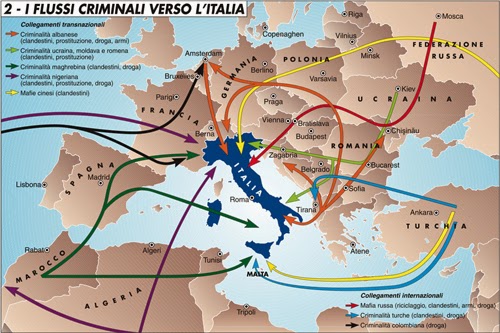 Understanding the dimension in which today, certainly unlike in the past, say, by convention, post the fall of the Berlin Wall, organized crime operates  prelude to define with more approximation to which size scale of illegal economy we must refer to while talking about criminal profits . In my speech, in addition to tracking the network and the articulation of these trades in the area of the Mare Nostrum, I wanted to focus on one aspect for me foundamental and therefore decisive for the definition of a unique picture of the whole criminal phenomenon, namely the ability of criminal organizations to grow only if they are capable of a preventive primary accumulation of illicit capital to capitalize by accessing a relational network that determines the subsequent evolution joining the real mafia system that includes three actors: crime , economy and politics. A brief aside on the primary accumulation of which Karl Marx had previously treated and theorized; the history of our mafia affirms also on the criminal side this capitalist need of a primary source of capital to capitalize for a business even illegal. The criminal laws are also economic , aimed at profit because of choices about the costs and benefits , supply and demand , causes and effects. This primary accumulation to capitalize outlines the leap in quality operated by criminal organizations that shift from  the simple exploitation of an annuity to making profit and therefore to the acquisition of capital gains. This process, however, is combined with the necessary research of relationships with actors external to the association that assumes- in its determined component- the mafia structure; components instrumental to the realization of these capital gains , the facilitators or the white-collar, professions in the fields of finance and economics, as well as a political and administrative actors, which are also instrumental to the attainment of the objectives of the mafia enterprise. This set of relational activities crystallizes a network of relationships that over time allows mafia-like organizations to acquire the characteristic to be waterproof to a possible reaction of civil society.
These concepts , summarily expressed in these lines are subject to a comprehensive study that we are conducting on the subject in order to overcome the stale readings and theories in the field of fight against the mafia that did not lead to any positive result of the continuing history of the Mafia in Italy for at least 150 years , and in international perspective , provide an overview of best practices usable in any socio -economic-political and historical context the conditions for the development of an advanced mafia-type crime occur.